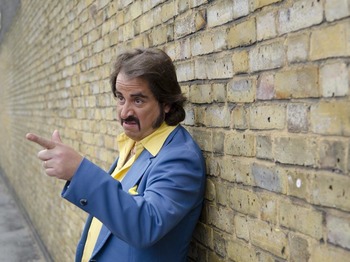 Hello, my name is Tony Marrese, I’m a very nice man, born of Italian parents into the dark armpit of Hackney, London, England, the earth just by the sun, but nearer the moon… I really enjoy mucking around and I do my best to avoid opening letters. I studied furniture design for 4 years at LCF which set me up nicely for the next 20 years as a Dj playing at fetish clubs, Bad Bobs, Hanover Grand, Bagleys, House FM, Passion FM, The Cross and many other dirty holes from here to Ayia Napa. I also made/was in some TV for Channel 4 inc, Ayia Napa fantasy island, Heavy TV and ‘How to be a Man’, where I was well funny and handsome. I am a competition-winning landscape gardener [Daily Mirror gardener of the year] and you can see me gardening on perpetual loop on sky channel 888 till the end of time. Comedy, however, is my first love, after pigeon stroking and just before paragliding with the cats. You can check out some other super comedy short films and sketches by pressing the KILLTV button under videos. This will take you to a place I share with two other grown men that are foreign yet charming, together we form KILLTV. I started to stand up at the end of 2009, since then I have been gigging around the south-east doing character comedy, straight stand up and lots of MCing… in fact I would recommend me as an MC as I’m cheap and very amusing.I do all this for the love of art, but if I find a bag of gold under a bush I’d give it all up in under 52 seconds. Love me as I once loved you

“He is possibly the funniest person in the world. I’m not just blowing smoke up his arse because he’s a mate. Incredible improvisations and finds the hilariously surreal and ridiculous in everyday mundane life.” – Leo Kearse

“The ex Channel 4 pundit Tony Marrese is here and it is the obvious choice number one if you want to have a fabulous time! Highly recommended – 5 stars!” –  Alessi Jazz