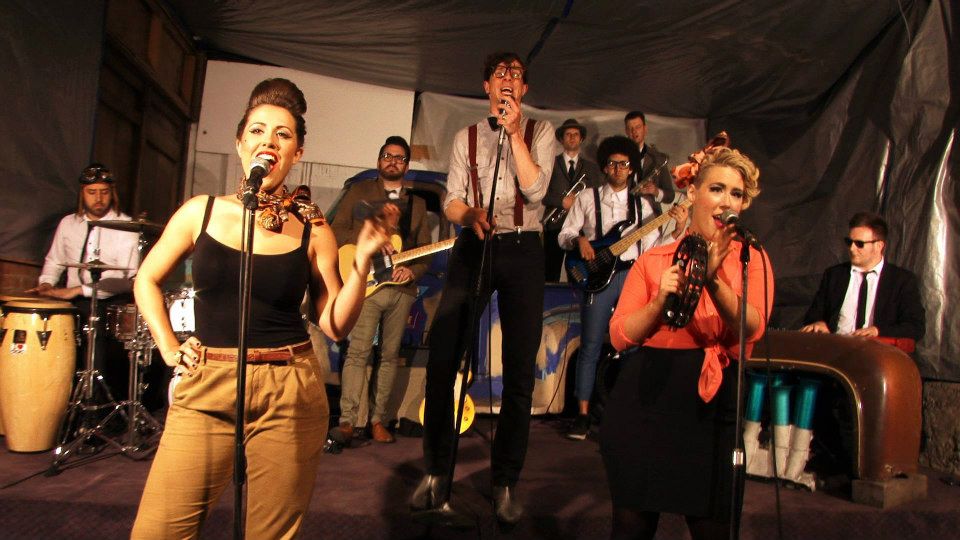 A mix of Tommy T’s quirky vocal power, the Belle’s beautiful harmonies and the rhythm and soul of The Tones culminates in the outstanding formation of Tommy T and the Belletones. Able to provide an energetic, spellbinding, slick-as-grease show that rolls, thunders, roars and soars, The Belletones mix of great music and an additionally brilliant touch of theatre makes them a highly unique and sought after band.
With their passion for the original classic R&B, rock’n’roll, and soul acts from the 60s and 70s which exuded such amazing energy, and love of modern pop and rock hits from artists such as Katy Perry, Kings of Leon, Aha, and Amy Winehouse, Tommy T and the BelleTones have fused together the best elements of both eras to create a new, exciting and truly original sound! Tommy T and the BelleTones are not just a band but a whole experience; a complete choreographed show.
The band have appeared on many TV shows including Later with Jools Holland, Top of the Pops, CDUK, This Morning, Des & Mel, Loose Women, Blue Peter, Popworld and GMTV. They have played at venues such as Wembley Stadium, Wembley Arena, The O2, Party In The Park, Glastonbury, The Royal Albert Hall, Hammersmith Apollo, Cafe De Paris, Cafe Royale, The Dorchester – London, The Grosvenor Park Lane – London, and The Royal Lancaster – London, plus many others.
Tommy T And The BelleTones is the perfect choice for those wanting a slick, cool, unique party band for your corporate function, private party, birthday party, or wedding reception.

The Way You Make Me Feel – Michael Jackson

Locked Out Of Heaven – Bruno Mars

I Kissed A Girl – Katy Perry

You Never Can Tell  – Chuck Berry

Sex On Fire  – Kings Of Leon

“Quite simply the best band I’ve seen in years! Thanks for making our evening such a great success. We’ll be sure to tell everyone that if they need a band that they MUST book Tommy T!” Charlotte, Chilham Castle, Kent

“Tommy T keep on getting better and better – that’s why we have them back every fortnight!” The Arts Club, Mayfair, London