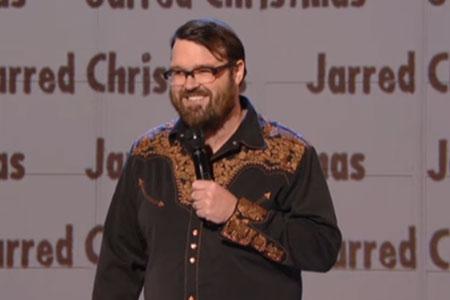 Jarred Christmas has a unique style that deftly mixes gags with storytelling. He has a dynamic onstage persona and the ability to improvise and roll with anything that’s thrown his way, making his comedy sizzle with originality.

His energetic storytelling has earned him a whole host of accolades including a Chortle Award and has catapulted him to the forefront of our TV screens in shows such as Mock The Week (BBC2), Never Mind the Buzzcocks (BBC2), 8 out of 10 Cats, (Channel 4), Argumental (Dave), One Night Stand (Dave) and Let’s Dance for Comic Relief (BBC 1). His radio credits include Act Your Age (BBC Radio 4), and Flight of the Conchords (BBC Radio 2).

Full of passion and charisma, Jarred takes the audience on a hilarious thrill ride of laughs and gasps with an edge of anger that manifests itself in his incredible rants against the small things in our lives.

His confidence leaves the audience secure in the knowledge that they are incapable of hands. His material is strong and distinctive, drawn from life experience and random happenings.

Whether performing sets, compering, acting, or improvising, Jarred has bundles of talent and will always shine no matter what performance situation he is put in.

“One of the funniest men to pick up a microphone” Time Out, London

“Likeable, intelligent and full of unpredictable energy” The Scotsman

“Christmas is robustly funny, his delivery confident, and his show not to be missed” The List, Edinburgh

“Jarred is human Red Bull – you will laugh and laugh and then you won¹t believe he¹s been on for 20 minutes.” Comics Choice – Time Out

“The talented Mr Christmas has certainly been bitten by the comedy fairy…. he is a highly engaging performer and his verbal gymnastics are impressive.” Chortle