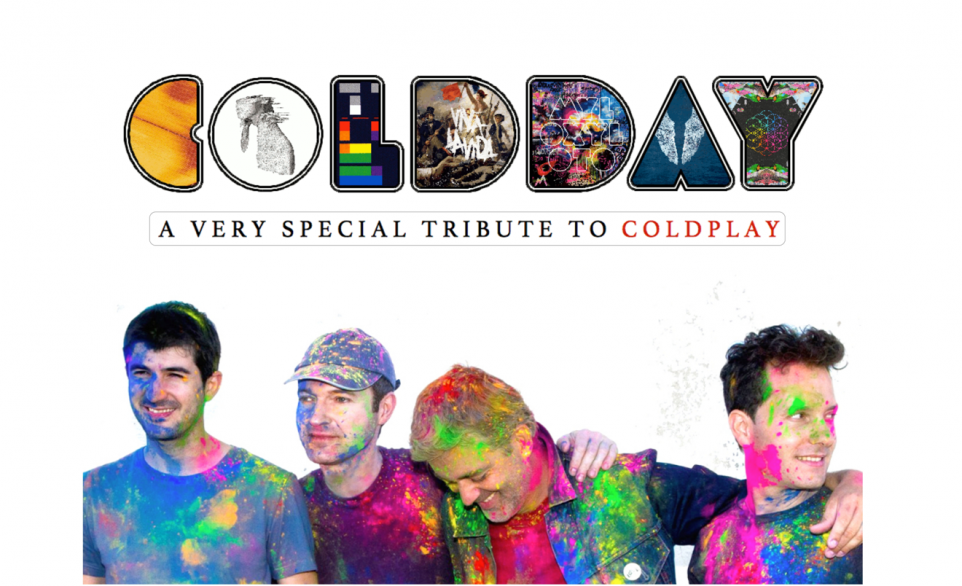 Coldday was born in 2012. This band is the result of joining 4 musicians, their talent and their efforts to make a great, faithful and honest live tribute to Coldplay, the band formed by Chris Martin, Jonny Buckland, Guy Berryman and Will Champion. This is definitely a band made by coldplayers and for coldplayers.

The band comes from Barcelona, where they started making its name bigger and bigger among other tribute bands. Its devotion for the hard work has brought the band to all different kind of stages, from private events to big audiences in big theatres or auditoriums. They have also played in different countries such as Spain, Andorra, France, Belgium, Nederland, Luxemburg, Germany, Romania and soon they’ll be performing in East Asia (Malaysia, Indonesia, etc).

Coldday brings to the stage all the magic of Coldplay’s music. During two hours you will experience all the atmosphere, emotion and energy of a real live Coldplay experience. A stunning performance, lights, faithful scenography… everything a coldplayer would expect.

Coldday plays all the great, popular tunes by Coldplay, from their very first album “Parachutes” to the brand new “A Head Full Of Dreams”. Faithful to the essence of Coldplay, the band stays true to Coldplay’s live performances.

“We’ve already seen you twice and we won’t miss the chance for a next show you do in Barcelona. Awesome!”

“I had seen several tribute bands doing great performances but with no personality and not much passion either… until I saw you guys: you just made my night! Great tribute to Coldplay, with a very generous repertoire with all biggest hits and delivering an amazing show… Nice job!”

“My sister and I haven’t had the chance to see the real thing yet… so we thought “ok, let’s start by seeing a tribute to Coldplay”. Ok, it wasn’t a huge stadium, with the pyrotechnics and stuff… but it was simply an astounding show with all the songs we love from all albums: Definitely The Scientist was one of the highlights! Oh, and by the way: the guitar player really looks like Jonny… a twin bro? :-)”

“I’m Peter from Belgium. I saw you guys last year in a music fest in Rollegem and it was a blast! I do also play guitar in a rock band and I pay attention to every tiny detail of all shows I go and, as a musician myself, I have to admit that you sound terrific! Show production is really accurate and all songs sound so close to the originals. Keep it up!”

“I’m a huge fan of Coldplay since their very first album. Actually I started getting bored after the Viva La Vida Album… And then I saw your performance in Luz de Gas (Barcelona) and I loved every song you played… even last hits! I don’t know what it was, but even these songs sounded so great and so rocker too! I’ll follow your lead!”