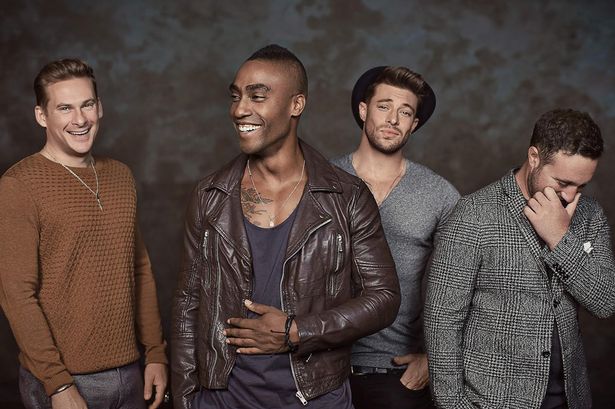 Comprising of London-based lads Antony Costa, Simon Webbe, Lee Ryan and Duncan James, Blue released their first single in May 2001, the anthemic ‘All Rise’, and were immediately on their way to pop stardom.

Hit singles from their three #1 albums included ‘All Rise’, ‘If You Come Back’, ‘Fly By’, ‘One Love’, ‘Sorry Seems To Be The Hardest Word’ (with Sir Elton John), ‘Bubblin’ and ‘Signed Sealed Delivered’ (with Stevie Wonder & Angie Stone).

The boys decided to take a break from their hectic schedules in 2005 and pursued solo projects, which included solo albums, stage performances, stints on I’m A Celebrity… Get Me Out Of Here and Dancing On Ice and much, much more…

On 7th June 2009, Blue reunited to headline at Capital FM’s charity event, Summertime Ball, at the Emirates stadium, ‘duetting’ with Lionel Richie on his classic ballad ‘Easy’ and performing their greatest hits before a sell-out crowd of 55,000. That was the first steps towards the long road to “Roulette”, Blue’s first new studio album in ten years.

In 2013 Blue followed up Roulette by performing 173 shows and events in 21 countries worldwide including five incredible sold-out tours, playing to over 600,000 people.

In November 2014, Blue announced they had signed a two-album record deal with Sony Music, starting with their fifth studio album Colours released on 9 March 2015. Blue then embarked on a 16-date tour around the United Kingdom, beginning on 21 March 2015 at the Guildhall in Portsmouth and come to an end on 9 April at the De Montfort Hall in Leicester, whilst also performing along the way in Plymouth, Cardiff, Bristol, Wolverhampton, Bournemouth, London, Glasgow, Newcastle, Liverpool, Manchester, Nottingham, Sheffield, Oxford, and Ipswich.

In May 2016 it was announced that Duncan was cast in Hollyoaks as Ryan Knight while Lee was announced to be on Eastenders in 2017 as Woody. In April 2017, Blue posted an image of them in the studio on their Twitter and Instagram accounts, as well as an image of Lee Ryan playing the guitar captioned with “#6”, seemingly indicating that the band is working on their sixth studio album.