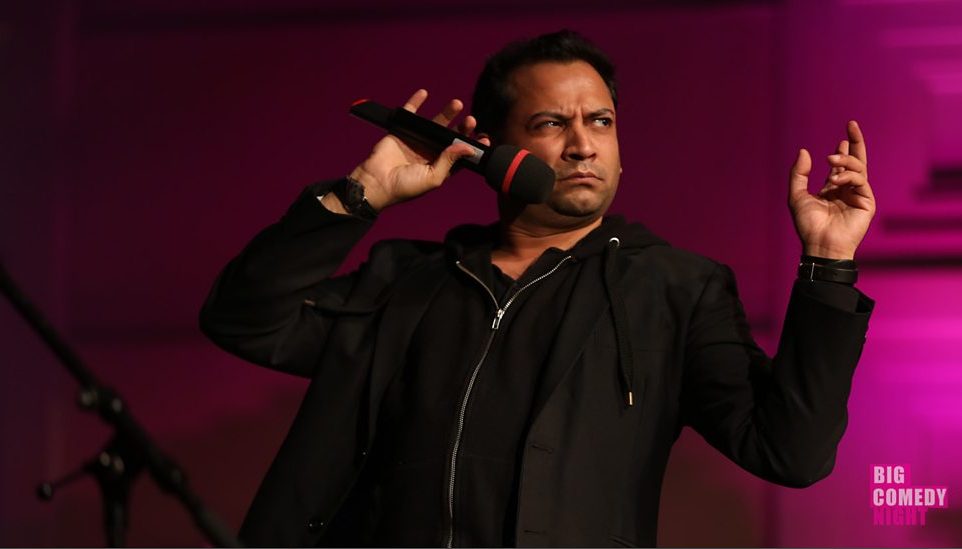 Since performing his awe-inspiring and record-breaking ‘52 impressions in 5 minutes’ routine in 2009, Anil Desai has spent the last 7 years performing across the UK (Opening and Headlining for numerous promoters, clubs and shows (incl: CKP, Spiky Mike, Mirth Control, The Comedy Club, Comedy Cafe, Soho Comedy Club, Chatback, Monkey Business, Laughing Horse, Spank!, Aeronaut, Covent Garden Comedy and many many more) and around the world, becoming one of the best impressionist comedians to emerge from the UK performing on the international circuit.

He has been invited onto many of the world’s best comedy and entertainment stages incl. The Comedy Store, Late & Live, Late Laughs, The Udderbelly, The Spiegel Tent, The Wellington Opera House, Her Majesty’s Theatre London at the Edinburgh, Melbourne, Sydney, New Zealand, and Ireland’s International Comedy Festivals where he performed his hit solo shows ‘Stand Up Chameleon’, “Hey, Impressions Guy!”, the ‘Night at the Movies’ trilogy and his current show ‘Impressions of a Hindude’.
Along the way, he has been on numerous international comedy tours, working with many veterans and ‘up ’n coming’ comedians in over 20 countries worldwide incl. Slovenia, South Africa, India, Singapore, Malaysia, Indonesia, Australia, New Zealand, the South Pacific, the Netherlands, Ibiza, Montenegro, Dubai, Lebanon, Germany and Ireland.
He’s also appeared at some of the UK’s biggest summer festivals including Latitude, Bestival, Splendour Fest, Chilli Fest and the Electric Picnic in recent years.

Desai’s unique brand of feel-good, energetic, stand-up comedy is based on his real-life stories, experiences and observations – at times dry, occasionally sarcastic, but with genuine honesty and an optimistic wisdom, from his love of movies, and film-stars to his everyday life, global travels, relationships and the ever-changing state of the world and it’s cultures.
His sets are fused with a who’s who of amazing impressions, international accents and everyday characters as he twists, turns and transforms himself into our favourite movie stars & celebrities with dynamic speed and lovable charm, often losing himself in the mix whilst creating hilariously entertaining results and being one of the most adaptable comics in the industry.
He won the audience vote for best comedian at the 2010 Asian Comedy Slam for doing more than just ‘Indian’ comedy. He has made guest appearances on Chortle’s Fast Fringe showcase, The Hour (STV), Hey, Hey, it’s Saturday! (Channel 9, AUS), The Unknown Movie show (Ch31 Aus), Good Morning, 4Live and Asia Down Under (TVNZ), The Kerner Show (German TV), Ali Mcgregor’s Cabaret Kitsch (BBC Radio 4) Humour TV (Netherlands), The Slammer Returns (CBBC) and BBC Asian Networks Big Comedy Night.

Alongside all the comedy, Anil has worked as a professional actor/comedian in numerous British Film, Television, Radio and Theatre productions for the past 2 decades, last seen in London’s West End and Edinburgh Fringe sell-out season of the gothic comedy-horror play ‘The Curse of Elizabeth Faulkner,’
With TV appearances in ‘Dick & Dom’s Diddy Movies’ and ‘The Slammer Returns’ for CBBC, and Channel 4’s social experiment series ‘Eye Spy’ (narrated by Stephen Fry). He also created and starred in his own mini sketch series How to Impersonate for BBC Comedy Extra.

His break into comedy came when he was cast as a regular in BBC2’s Award-winning Goodness Gracious Me series. Some of his other numerous credits include Phoenix, Mr.Charity and Doctors (BBC), Headcases, Comedy Cuts and The Bill for ITV, the Evening Standard Award-nominated ‘Office Party’, the hit West End production and No.1 UK tour of The Adventures of Tintin (Directed by Rufus Norris) and as the cerebral clown ‘Touchstone’ in Shakespeare’s As You Like It for Watford Palace Theatre, London. He has also worked in productions at The Orange Tree, Tricycle, Young Vic, The Cockpit, Birmingham Rep and Soho Theatres through his career.

Anil has presented/hosted, voiced and performed on many business awards shows, corporate, public and private events, charities and commercials.

His vocal skills are often called upon for a whole variety of projects – he recently voiced his first animated character in ‘Round-the-Clock’ (Turmeric Prod/BBC), and narrated and voiced over 40 celebrities in the audiobook ‘The Great Hollywood Double Hustle’ by Rory Cantwell (available on iTunes & Amazon).

He has also been the voice of various cars in Ford’s ‘Talking Car’ campaigns, guest appeared in sketch shows and plays for BBC Radio 4, narrated the short Documentary film ‘Walter & the Tigers’ (Perryman Pictures), and voiced the many radio commercials in the multi-award winning short film ‘Warhol’ (Ditto Films).

“A possessed schizophrenic tour-de-force…more than an impressionist, combining typical observational stand up with voices making him a force to be reckoned with. Catch him before you’re too far back in the arena to see him” Hairline (Edfest)